I enjoyed this lighthearted comedy based on a true story that happened in 1997. It is about David Ghantt (Zach Galifianakis), an armored car guard who robs his employer Loomis Fargo. Because he is in love with his former work partner Kelly Campbell (Kristen Wiig), he is tricked into committing the largest cash robbery in U.S. history. He steals over 17 million dollars in this heist. David assists in helping the FBI catch the real mastermind, Steven Chambers (Owen Wilson).

Masterminds (2017, rated PG-13) is a pretty funny movie that I highly recommend. Watch the film on Hoopla today.

In this compelling movie based on a true story, a corporate lawyer (Mark Ruffalo), switches sides (and finds his calling) by spearheading an environmental lawsuit against a chemical company. Rob Bilott. He recently made partner at a high powered law firm when he is approached by neighbors of his grandmother. What follows is a years-long battle against DuPont, putting his career, marriage, and health in jeopardy.

Fans of Erin Brockovich will find much to enjoy in Dark Waters (2019, rated PG-13). They are both stories of underdogs fighting for the health and safety of the public. For more behind the characters and story of Dark Waters, check out articles from The Hollywood Reporter and Slate.

This film is a high-octane thrill ride from start to finish, featuring the fastest racers in the universe as they compete in the most dangerous car race, Redline. JP is one of the daredevil racers chosen to take part in this no holds barred race where anything goes. Does he have what it takes to get to the finish line with his trusty muscle car and fantastic pompadour hairstyle?

Even if you are not typically a fan of racing movies, Redline (2009) is a must see for the animation alone. It took 7 years of production to get this quality and it shines through every aspect in the movie. Watch Redline on Hoopla today.

No Country for Old Men

Start this film only if you're interested in the kind of drama that grabs your attention and refuses to let go for its entirety. (My only problem is the same one I have with all terrific movies that are rated R: in my opinion, these films would still be just as terrific if they were made PG).

Tommy Lee Jones, Javier Bardem, and Josh Brolin are at the top of their game in this intense story between good and evil (including the evil of greed and lust for money) with an ending not always what you're expecting.

When We All Fall Asleep, Where Do We Go? by Billie Eilish

One of the positive things during our extended times at home is discovering new music. Billie Eilish's album When We All Fall Asleep, Where Do We Go? (2019) is truly one worth listening to. Each song is so very carefully crafted by Billie and her brother Finneas that it leaves you wanting to listen to each song on repeat over and over. My recommendation is putting on some sound-canceling headphones to really dig in and enjoy every layer that is put into each song and to enjoy Billie's beautiful soft voice in songs.

Notable songs are "Bad Guy," You Should See Me in a Crown." and "My Strange Addiction." When We All Fall Asleep, Where Do We Go? won the Album of the Year, Best Pop Vocal Album, and Best Engineered Album, Non-Classical at the 2020 Grammy Awards. Also, "Bad Guy" won the 2020 Grammy Award for Record of the Year and Song of the Year. Eilish's sweep is rare: she is the first woman and second person ever to win the four main Grammy categories—and is the youngest person to win Album of the Year. Get all the details at Billboard.com.

Listen to the award-winning album on Hoopla today.

Kurt, a young art student, falls in love with Ellie, a fellow student. Her father Professor Seeband, a famous doctor, is not happy with the match and is out to destroy it. What none of them know is that their lives are already connected through the terrible crime Seeband committed during the war. Never Look Away (2018, rated R) is a stunning story, matched with outstanding cinematography.

In German with English subtitles.

For fans of The Reader, Black Book, Frantz, Tulip Fever, and The Exception.

Molly's Game is high speed and high stakes, just like its source material: the true story of "poker princess" Molly Bloom, who ran an exclusive underground card game for the rich and famous—until the game's ties to the Russian mob entangle her in a federal indictment. Rapid-fire dialogue, interesting characters, and a standout performance from lead actress Jessica Chastain all come together to make a movie that feels just as energetic and dynamic as each game.

Check out Molly's Game written and directed by Aaron Sorkin on dvd or blu-ray. To learn more read Molly's Game: from Hollywood's elite to Wall Street's billionaire boys club, my high-stakes adventure in the world of underground poker by Molly Bloom or Billion Dollar Hollywood Heist: the A-list kingpin and the poker ring that brought down Tinseltown by Houston Curtis.

Everybody Loves Raymond. The Complete Series

This American sitcom was the best show ever on TV. Everybody Loves Raymond (1996-2005, rated TV-PG) features the comedic happenings of the Barone family. Starring Ray Romano, Patricia Heaton, Brad Garrett, Doris Roberts, and Peter Boyle, the casting is right on.

The writing was superb. I've watched all of the seasons over and over again, and I laugh so hard every time. Check out all nine seasons of Everybody Loves Raymond from the library today.

Here are a few TV shows I've enjoyed streaming on Netflix. No worries if you don't have your own subscription—borrow one of the library's Rokus to use ours!

With the arrival of Disney+, many of us are reliving our tween years by watching old favorite shows like Lizzie McGuire and Even Stevens. Perhaps this is what makes the release of Honey Boy (2019, rated R), a film based on Disney star Shia LaBeouf's childhood experiences as a rising actor, all the more irresistibly jarring.

Fans of  Shia LaBeouf first fell in love with his class-clown act in Even Stevens and continued to admire his work as it took on a more serious note in films like Disturbia or Fury, or even a more commercial note in films like Transformers or Indiana Jones and the Kingdom of the Crystal Skull. Somewhere along the way, however, it became clear that LaBeouf was battling some inner demons and the persona he was putting into the world didn't always line up with what fans expected to see.

Honey Boy tells the brutally honest story of what life looked like for LaBeouf behind the scenes. LaBeouf plays his father in the movie, exposing the abuse he suffered in his care. Noah Jupe, who plays a young LaBeouf, expertly depicts the longing for emotional support that is so often masked by humor. The screenplay was written by LaBeouf during his time in rehab as a form of therapy and now his story is shedding light on the ways we can all so easily bury our past, giving no thought to the damaging weed that will one day sprout through the surface as a result.

Watch Honey Boy today on Amazon Prime, or stick to the lighter side of Shia LaBeouf's career and enjoy all episodes of Even Stevens on Disney+. Borrow the library's Roku with Amazon Prime or Roku with Disney+.

After listening to Greatest Hits 2, you will know why Bob Seger is one of the bestselling artists of all time. This compilation album released in 2003 contains some of his best music, including "Katmandu," "Tryin' To Live My Life Without You," and "Rock And Roll Never Forgets." Once you've heard this album, it will be obvious why Bob Seger has a career spanning six decades and has sold more than 75 million records worldwide.

Listen to the album on Hoopla today.

In Avatar: The Last Airbender the world is filled with war and chaos as the Fire Nation tries to continue its conquest of the Earth and Water Nations. The main tool for war are benders who control the various elements of fire, water, earth and air, and only the avatar can use all of them, but he is missing. The story follows Katara and Sokka from the Southern Water tribe who find Aang, a young airbender who is also the avatar, trapped in an iceberg. Aang needs to learn to master all the elements so he can stop the Fire Nation and restore order to the world.

Avatar: The Last Airbender (2005-2008) is a great animated series for all ages. There is something for everyone in the story, with fun memorable characters and fantastic fight scenes. Binge watch season 1 (2005-2006) on Hoopla today or check out seasons 1 - 3 on dvd. You can also read the comics!

And check back soon for my review of the sequel, The Legend of Korra.

Watch this 90-minute documentary about the story of Nikola Tesla and his achievements from the early 1900s. He was overshadowed by many famous inventors in his day and was never given the recognition he deserved—to this day. He was considered the inventor that kick started the Industrial Revolution.

In Teslafy Me (2019), I learned his patents and ideas are still being used today and remain unchanged. He believed in renewable energy and that energy should be provided to the world for free. His technologies were ahead of their time. He believed in free wireless power transmission and had ideas for cell phones and internet. He was definitely a genius and we are only finding out about him today.

Watch Teslafy Me on Hoopla today. If you are interested in this subject, read or listen to books about and by Nikola Tesla on Hoopla. 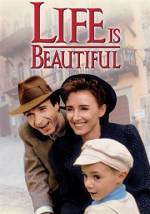 Life is Beautiful (1997, rated PG-13) is just that, a beautiful movie about a father who will do anything in his power to keep the horrors of WWII away from his son. I love how Roberto Benigni invents the whole game scenario for his boy and humorously wings it with every turn for the worse in their prison camp.

The ending is nothing short of brilliant, loving, and courageous. For those movie fans who shy away from foreign films because of the subtitles, I encourage you to watch this wonderful movie that proves how love will always be victorious in the end.

An orphan in search of his mother unexpectedly obtains superpowers while at yet another foster home. Shazam! (2019, rated PG-13) is an odd mix of low-brow humor combined with typical superpower action scenes and a dramatic storyline that is ultimately very touching.

I would recommend this to anyone who enjoys superhero movies and silly comedies. Starring Zachary Levi as Shazam and Asher Angel as his alter ego Billy Batson.

Place a hold on the DVD or Blu-ray for pickup. Also, read Shazam! comic books on Hoopla.